EVERGREEN: THE ROAD TO LEGALIZATION 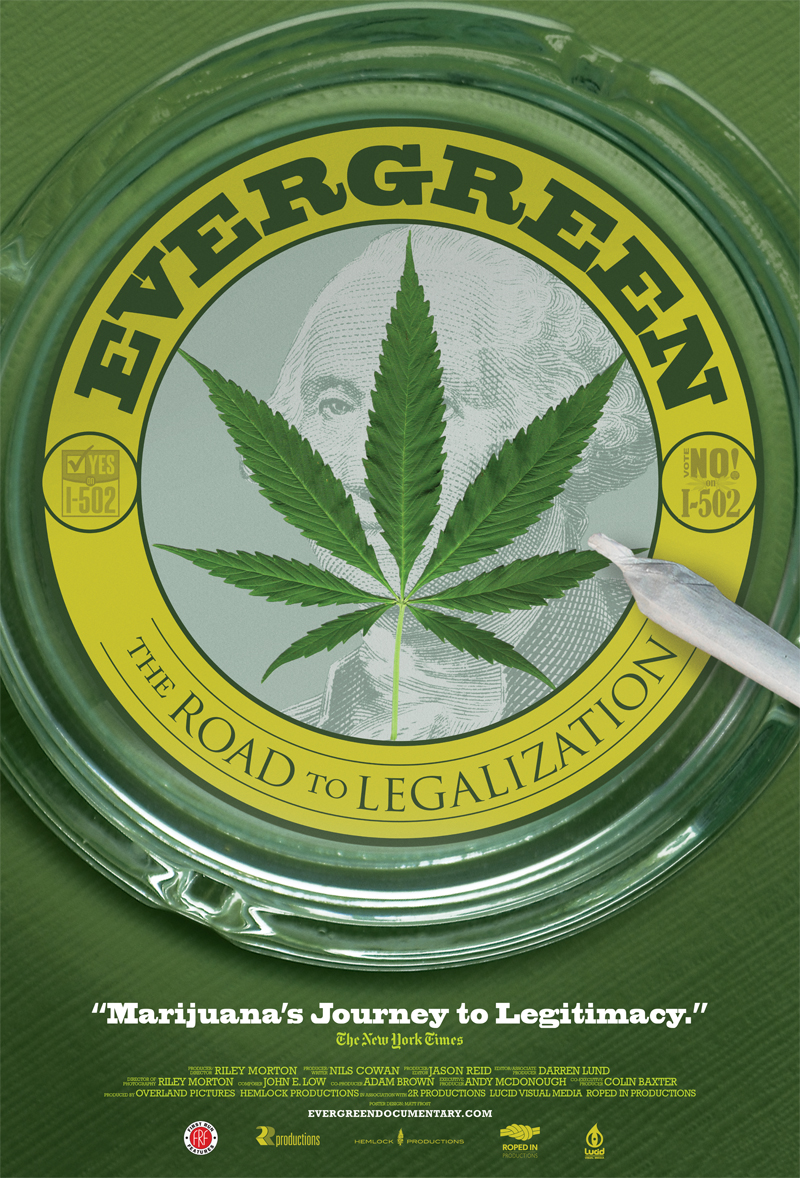 “3.5 out of 4 stars. An enlightening look at the road to pot legalization… A taut, thorough chronicle of the 2012 campaign to pass Initiative 502… ‘Evergreen’ is an energetic study of a hard-fought battle… a lively story about passion and political compromise.” | The Seattle Times

“Riley Morton’s resonant documentary examines two opposing fronts in the battle to decriminalize marijuana use… Morton and Cowan elucidate the situation from the ground up with considerable clarity, aided by the well-paced editing of Darren Lund and Jason Reid. Lensing by helmer Morton fully exploits the photogenic qualities of both the state and the weed.” | Variety

“An engrossing behind-the-scenes look at how Washington state went from a politically polarized battleground to be one of the first states to pave the way for drug reform in the U.S… ‘Evergreen’ avoids the generic viewpoints of hippie proponents and right-leaning detractors that have become caricatures of marijuana debates over the years… In conjunction with sharp editing and pacing, montages and interviews allow the nearly 90-minute film to roll seamlessly… Portraying emotion and devil’s advocacy are this balanced film’s strong suits… deft post-production work and a solid breakdown of statistics stitched throughout prove that “Evergreen” accomplished its goals: to show how other states can reform their drug policies (or how not to) and how complex Americans’ stances on marijuana prohibition have become.” | The Denver Post

“You haven’t seen the marijuana legalization debate rage on like this before… Both sides are given equal time, truly giving the film a sense of urgency that this type of issue truly deserves… a thrilling, stakes-raising bit of storytelling from everyone involved here… A deeply vital piece of political discussion… a really thrilling look at where the real discussion behind this movement lies… we’ve rarely seen the issue of marijuana legalization discussed this viscerally. Really great bit of documentary filmmaking.” | Criterion Cast Review

“The movie features accurate and well-edited interviews with key local, state and federal government officials… This is a well-produced documentary with well edited sound bites from many of the key people involved. There is great footage of spontaneous anti-502 demonstrations that turned violent. 8/10.” | It’s Just Movies

“Morton’s feature-length debut is a compelling look inside not only the war on drugs but the grueling process of civic reform in today’s culture, a primer on how difficult it is to institute real change in contemporary America.” | This Week in New York

“Marijuana’s Journey to Legitimacy. This assured documentary is loaded with rancor … the battle isn’t over whether pot should be legalized, but to what extent.” | The New York Times Movie Review

“The award-winning and critically acclaimed documentary ‘Evergreen: The Road to Legalization’ shows the candid, behind-the-scenes drama of this historic change in American drug policy through the eyes of those who lived it (including yours truly!). And it gives a glimpse at just how–I believe–state by state, the Prohibition of our age will be ended.” | Rick Steves

“‘Evergreen’ reveals the weird lessons of Washington’s weed battle… a fascinating case study in the promise and perils of ballot-box democracy, and the give-and-take nature of social progress.” Review of “Evergreen” | Salon

“An in-depth film documenting all of the difficulties and nuances activists faced on the road to passing I-502, a piece of legislation in Washington State legalizing small amounts of marijuana. It is a no frills, serious look at both sides of the aisle, but the surprising thing is that the two sides aren’t pro-legalization vs. anti-legalization—we don’t see much in the way of predictable, blustery Reagan-era anti-drug conservatism.” | Film Forward

“Interview snippets with those on both sides of the issue are quickly interspersed with each other to give the appearance of a live debate… Morton shows great promise as a director. He himself never appears on camera, and instead allows the main players on the issue to be the stars of the film. While this approach may lack the theatrics intrinsic to a Michael Moore film, it treats the issue more seriously, and gives audiences access to a genuinely new perspective…” Review of “Evergreen” |  Highbrow Magazine

“Journalistic objectivity enables the movie to illustrate a fascinating truism about human behavior: People on opposite sides of an issue often favor the all-or-nothing hardline over true compromise.” Review of “Evergreen” | CityArts

“3 out of 4 stars. It’s at its best when it’s creating a dialogue between supporters and opponents, calling special attention to the thoughtful reasoning behind the opposition.” Review of “Evergreen” | The Seattle Times

“An important document for students of political history to see how a successful campaign is won, and how it’s lost… It’s a useful companion to DA Pennebaker and Chris Hegedus’ The War Room…“ Review of “Evergreen” | Another Rainy Saturday

“Final Grade: B+. It’s a good movie, and if you are interested in how I-502 might shape up, you should give it a try.” Review of “Evergreen” | The MacGuffin

With one new film, SIFF goes to pot | KING 5 News

Evergreen: The Road to Legalization in Washington ticket listing | SIFF.net

It’s time to start getting excited about SIFF | The Stranger

Legalizing Marijuana: I-502 The Movie | The Seattle P-I

Evergreen – A Documentary in Need of Green | Rick Steves Blog