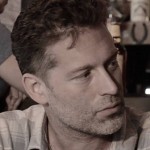 Justin Freet is a filmmaker and festival organizer in Seattle.

He attended UCLA, Washington State University and the University of Washington consecutively, eventually dropping outof all three to enroll in the “Academy of Life Experience.” In 2005, Freet founded the RAWSTOCK Film Festival, a bimonthly film and fringe theatre event focused on visceral independent cinema and provocative live performances. Over the last decade, RAWSTOCK has screened 371 films by a large number of up-and-coming directors.

Freet has written and directed over 20 short narrative films. In 2011, he launched Every Day Is A Journey, an ambitious experimental narrative project in which six independent filmmakers were tasked with telling one story with no pre-determined arc. In addition to co-writing The Barista script with Reid, Freet is currently co-producing a new series of episodic horror films with Christian Palmer and The Rambler director Calvin Reeder, and he will begin teaching a film studies course titled “Unconventional Cinema Narrative” at North Seattle Community College in Fall of 2015. In addition to creating fictional characters, he creates actual people… Freet has two sons.